UPDATE! GO GO GO
The show was a hit, and is a FRINGE FAV, meaning they are having 1 extra showing THIS SUNDAY Aug. 30th, noon!

Agreed, this is excellent, Jessie Bear and Stefan Hartmann are amazing talented people. Go watch TYPE WHAT NOW at the FringeNYC.com LAST shows on SUN, TH, SAT!  This is Jessie Bear’s life and story regarding diabetes.  Here’s her personal blog, in which the play was developed.  http://typewhatnow.com/

I re-blogged a great review by Jaysen Headley for you below the show’s info!  ENJOY and GO SEE IT NOW!  LAST WEEK!

Type What Now
Writer: Jessie Bear
Director: Stefan Hartmann
What are ten things you hate about your body? What’s one you like? An unlikely diagnosis takes Jessie on a journey exploring body image and chronic illness that questions what society tells us is healthy, and what healthy really means.
1h 40m   Local   Queens, NY
Drama   Comedy

Tonight I had the overwhelming pleasure of seeing Jessie Bear perform in her new almost one woman show, Type What Now. In the play, Jessie recounts her real life tale of being diagnosed with Type 1 Diabetes and oh what a journey it is. Jessie starts of by talking about her thoughts of self hatred, which we all have. She hates her body and the way every inch of it looks and she tells us all of this at length.  Even as she tells it, you can feel the audience judging, not her, but themselves and it’s a powerful intro to say the least.  It sets the stage for a play which explores self loathing, guilt, pain, fear and finally joy as Jessie unearths the epic tale of her battle with her very own body. 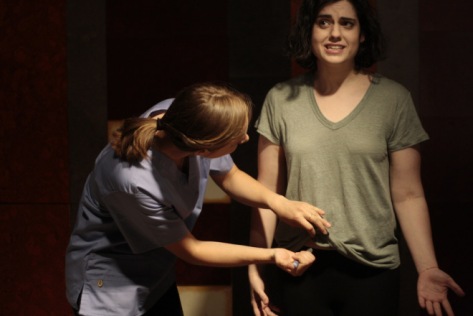 Anne Flowers as the one of the many medical officials which examined Jessie.