This will be more of a ‘free-write” while watching the film, than a structured review.  If you want a full in-depth review and history on the film, I highly recommend Jaysen’s post ….

So what you’re reading is a result of a free-write while watching the film, with comments made while reading what I wrote.

This film came out 1 year after Cinderella.

I forget there was other music besides the ones most remember, like the song during the Mad Hatter’s Tea Party, or the song that the caterpillar guy sings.

I wonder if Alice is really just daydreaming.

She must be dreaming if she thinks she can talk to animals like a person.  I don’t know why, but I thought she was brave to be running after a rabbit to ask it a question.  She really is kinda nosy.

We don’t know that she’s dreaming at first, if she is at all.

Oh, look a big dark hole in the ground! Yes, I think I’ll crawl into it! Oh, and who cares I’m in this dress.

She just seems crazy. Yes curiosity does lead to trouble.  She has absolutely no problem with falling down this hole; just say goodbye to your cat.

Oh, and there’s nothing weird about floating down either,… and seeing things floating around.  She’s crazy.  Delusional.  Perhaps she’s in mad denial, like in the film Pan’s Labyrinth?  It’s like a trippy dream.  IF she’s just day dreaming,.. I really do think she has a problem.  Living in a fantasy world.  What is going on with her life for her mind to do this.

She doesn’t flinch at anything at all.  I’d be freaking out?  Wouldn’t anyone be?  And she just eats and drinks whatever.  And why must she chase after this rabbit?  She’s just super nosy and has to know his business.  Maybe she’s actually drinking or eating something else? And no, she has no problem talking to anything, like doorknobs.

Again, looking back now, it’s all just dream logic.  Or she’s on drugs.

Maybe I shouldn’t have eaten these flowers I found in the woods.

She earlier talked about a world where everything is contrary,.. and basically doesn’t make any sense,.. perfect for this disturbed child. WTF,… wow, she’s not scared of anything.  Is this how fucked up her mind is?  Is she mentally ill?  Why or how is this happening.

The beginning, she was in the “normal” world, day dreaming under a tree while someone was reading her a history lesson.  Perhaps she’s got mad ADD, and daydreams,.. I know history is boring.  Maybe she just fell into a coma or something?

There were so many things I wanted to fix about what I’m reading, but maybe for once, I’ll leave it as it was, minus some errors.

More music than I remember.
Her mind is going crazy.  She’s loosing it.  It’s like talking to a child playing with themselves, mixing various toys together, and making things up as they go along.

Smoking in all Disney films so far..
Animals are like humans, like in other Disney films.
What is going on,… why, why.
In a way, it’s like a Doctor Seuss thing. 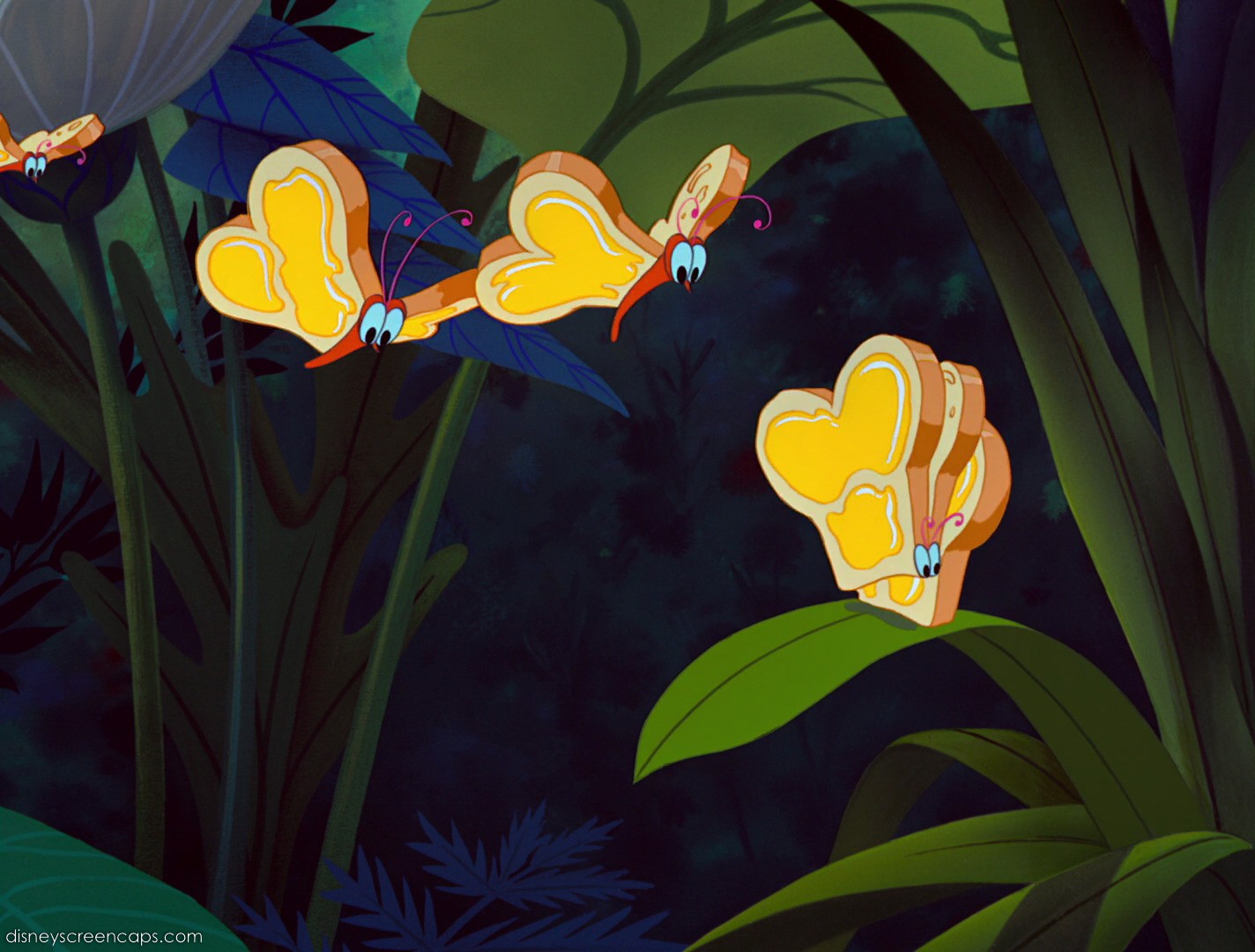 Awe, and I had to add this,.. cat-erpillar and um, dog-centipede?

One thing in common with most of the occupants of Wonderland are kinda off, and rude-ish.

She can’t remember things as she used to apparently.
I notice they all like to tell some kind of stories too, the occupants.

She is eating mushrooms.  Shrooms.  She gets too big and too small, back and forth.
Everything keeps accusing her of things.

Yeah, is we ran into this girl in real life, I think we may be quite annoyed.  Kinda a debutante?

Cheshire cat,.. he’s magical.
Talking to crazy people,…. Jaysen said it’s like talking to me.
Is he trying to protect her,.. OR is it trying to find it’s way, her way, back to reality?   Everyone is mad here, he says. He’s not all there himself.  She says she better be careful not to upset these mad people.

Maybe this is how she sees and experience the real world,. in real-time,.. her brain in broken. Maybe she is mentally ill, or something in real life,.. or even paralyzed, or ?? Everything she experience is a parallel to something that is happening in the real world.
eg. in the world, she is at someone’s birthday party,.. in her mind, she is having an unbirthday,…

She is fond of “T.”  Truth.  She keeps trying to get some, but can’t.  They are talking about riddles.
She said she was sitting by the river bank with her cat.

He’s late,… for a date with Morpheus?  To give him the red and blue pill?  Or late to taking one himself?

The white rabbit, keeps showing up,.. and she has to follow it.  Nosey. The rabbit is late, late late, for a party.

She’s had enough nonsense and is going home,.. and what does she care where the rabbit is going,.. um yeah.  Tuldyu wood?

Pull yourself together girl!  So, she wants to go home now.  She’s tired of this trip.  Don’t know what I meant to write there at the end.

She’s like, “when I gets home, I’ll have to write a book about this place.”  Oh, it’s getting dark.  If this was real life, it’d be really freaky, you’d have to be mental, or on drugs.  It’d be nice if something made sense for once, for a change.

“When one’s lost, it’s good advice to stay in place, until someone finds you,” but who would know to?   She gives herself advice, but rarely takes it.   Her problem,… her mind knows better but she is curious, and loves the change something strange begins.  She never stops to reason.  She knew there’d be a price to pay someday.  Will she ever learn to do the things she should?  Problem most children and many people have to different degrees.

The point of the story?

The Queen’s way,.. who would go mad over her.

The cards lay face down, bowing to the Queen.

and the King is super little.

She has bucked teeth.  Off with their heads!  And the crowd goes wild,.. which surprises, and delights the Queen.

Trying to find MY way home. YOUR way?! MY way,.. the Queen’s way. Bow while you talk, saves time. Do you play croquet?

The Cheshire Cat messes with things on purpose, and the Queen gets mad,.. and when she gets mad, someone loses their head.  So Alice is to lose hers.  The King pleads to have a small small trial.  TO which she reluctantly agrees.

She’s impatient, and is eager to get to the part where she looses her temper!

This is like the King’s little thing,.. his only joy; the trial.  He takes joy in the pleading, to draw it out, with witnesses, etc.  Characters that she came across before now are all brought to witness,.. and the Queen yells to write it down,.. write it down!!!

Alice remembers the mushrooms,.. and eats some,….
and grows.  “That those that are really tall, must leave court”??

Then as she tells the Queen off,.. saying she’s a pompous, mad tyrant??  She starts shrinking.   And is now in danger again,.. she runs,.. and is chased,.. running back through everything and everyone she had already been through in Wonderland, until she reaches the original door, and doorknob, and she is trying to get out,.. but the doorknob says he’s locked.  Alice needs to get out, but the door says, she IS out,.. that in fact,.. she’s asleep outside.  Alice,.. looking through its keyhole,.. things are even more abstract, like a dream, whirling. The Queen yelling ,,,.. off with her head!!!!!  Then she wakes up, to the woman, who had been reading the history lesson, asking her a question,.. “wake up, come along and recite your lesson.”  Her lesson. Moral?  Alice spews off the riddle the caterpillar had said,.. to which the woman is like “what the what are you saying?  Oh well, come along for T. ”  And they head over the little bridge and brook, towards the horizon, as the sun sets,.. towards home,…

It’s almost as if you could’ve put the various scenes of the film in any order, and it could still make sense?  Or maybe I’m all wrong, cause I’m not looking deeply enough,.. through the looking-glass.

Un-birthing,.. unmake, to un do,.. her brain is undoing the damage,.. regressing,.. to a previous back up, or update to her OS,.. her system,.. to a time she ‘worked’,… un, unlearning,.. going back to conception. Like not just a reboot, but a factory reset.  Cause her brain has crashed.

FYI, non of these images are mine!  I LOVE all the gifs I’m finding online!  Thank you everyone who made them and posted them.  If you want me to take them down, let me know.  They’re all so wonderful in conveying the film’s ideas, makes my memory of the film so much better than when I watched it here.

NEXT UP:
HARRY POTTER & THE SORCERER’S STONE BOOK & FILM

JAYSEN HEADLEY’S VAULT DISNEY PROJECTS:
Jaysen Headley asked me to re-watch every Disney Vault film in chronological order with him. We’re gonna try to watch at least one a week if not 2. He’ll be writing a blog to accompany this project, and I will post a companion to it.