This week I’m talking out of my ass about Lady and the Tramp.  I saw this when I was really little.  I think I actually saw it projected from a projector.

Vault Disney #15: Lady and the Tramp

The following are notes as I barely watched the film, and now adding in some annotations.  Missing the of whole point watching it YAY!  This in a way is an exercise in writing.  Bad writing, or just writing for the sake of writing for yourself without being judgmental.  If you actually want a post about this film that’s constructed with thought and provides a review of value (here’s that self-judgement), you should read Jaysen Headley’s post on Lady and the Tramp!

Was this the First letterbox? Wide screen? Disney film?
Animation looks much more modem.
The story itself is even set in a more  modern time.
Not sure fantasy land.  Maybe “sure” is supposed to be “pure?”
No princes and princesses in this story.
Jaysen points out that it’s the first Disney rom-com.

A dog of a wealthy family, and the other pets in this wealthy neighborhood.  Just an observation of the choice of setting and class of characters portrayed.  It’s like an ongoing theme in Disney animated animal films in particular.

Lady is like a child who learns  about a baby, a second child, a sibling, not understanding why the parents are making such a fuss about having a baby.
I suppose some of my comments make more sense in context if you were watching the film while reading this.  Sorry.  Though I recall that perhaps the human owners of Lady were making a big fuss about having a child, and Lady looking on like they’re crazy?
Being ignored.  By the preoccupied humans.

Lady singing about ‘what is a baby’ seems pretty bad, which is surprising considering how all the Disney leading ladies normally sing angelically.  Perhaps in afterthought it’s not a horrible thing to NOT do what’s expected or make them such perfect singers?  In some cases adds personality and character, though I can’t recall if that was the case.

The tramp tells her all about what will happen to her when they, the humans, have a baby.
She’ll be Neglected and pushed aside.

Um the Siamese cats.  Have you seen this?  This is racist right?  Not acceptable?
House-sitter.  What about it, I don’t recall.
Cats are evil.

She is Set up.
She gets her a muzzle, and she runs off where Tramp helps her to get it off.

Whoa, the alligator at the zoo was scary.

They have a date at Tony’s restaurant, and they (the humans) recognize it as a date like they were real people, setting up a table, serving real food, spaghetti, and playing  music.

Romantic.  Great song.  I remember  this as a child.
The spaghetti scene was like burned into my consciousness.
Is this one of the reasons that got me into spaghetti?
The romantic idea associated with eating it?  BUT, I don’t like meatballs,….

Tramp encouraged her to be free and live without a leash, without owners.

But she loves them and who would take care of the baby?
Reminds me a bit of ‘Oliver and Company.’

He goes to have some fun which she is reluctant to do, but he  tells her to ‘make some memories.’
Is this where I got the idea (philosophy) that ‘life is about creating memories?’  I have often said that about life.

Lady is caught by the dog catcher, who catches strays.
All the dogs there are miserable.  All crying,…

Immediately she is pointed out as  the debutante rich girl by the other dogs.  Asking “Why is she here,…” etc.

Some sketchy types help her.

One, a female dog that looks particularly trashy,… a “lady  of the streets” complete with darkened eyes like heavy, drowned out eyeliner.

They say that her (Lady’s) dog-tag is her passport out of there.
They tell her if they do not get out of there, they may be put to sleep.

They talk about the ‘tramp’ who seems to get away from (with) everything,  and then go on about how many women he has, this ‘tramp.’  And this female “trashy” looking dog sings a nice jazzy tune about this ladies-man; this ‘tramp.’
Is that where the term ‘tramp’ used among humans comes from or?  Was ‘tramp’ what they called a promiscuous male dog?

They continue to talk about the ‘tramp’ as if it were an urban legend, and how it’s the end for him when he falls on love.

Her neighbor dogs say she  Court one of them, so she could live with them.  She “Court” one of them?  ‘caught?’ ‘can’t be?’ ‘could be?’ ‘court’ as in she courted one of them?
Tramp shows up and they all turn their backs on him (because of how Lady was treated by him), and she tells him off, and sends him off for doing that to her, leaving her, and “who are all these other girls.”

A rat is seen getting up into the house, into the baby’s room and Lady tries to make a lots of noise, but she is tied up.

Tramp comes  to help, and Lady escapes, saving the baby, but the Aunt comes in and calls the dog catcher, and Tramp is taken away.

Lady’s owners finally come home witnessing Tramp being taken as if he had caused something in the house, and is worried  about the baby  .  They run in and the Aunt is adamant about them getting rid of Lady, who is hysterical as she tries to point the rat out.  Then she is vindicated.  I guess the rat is discovered?

The other dogs in the neighborhood realize how Tramp is actually good and rush to rescue him, chasing the dog catcher’s car.  One of them stops it, but us run down.  Sadness. 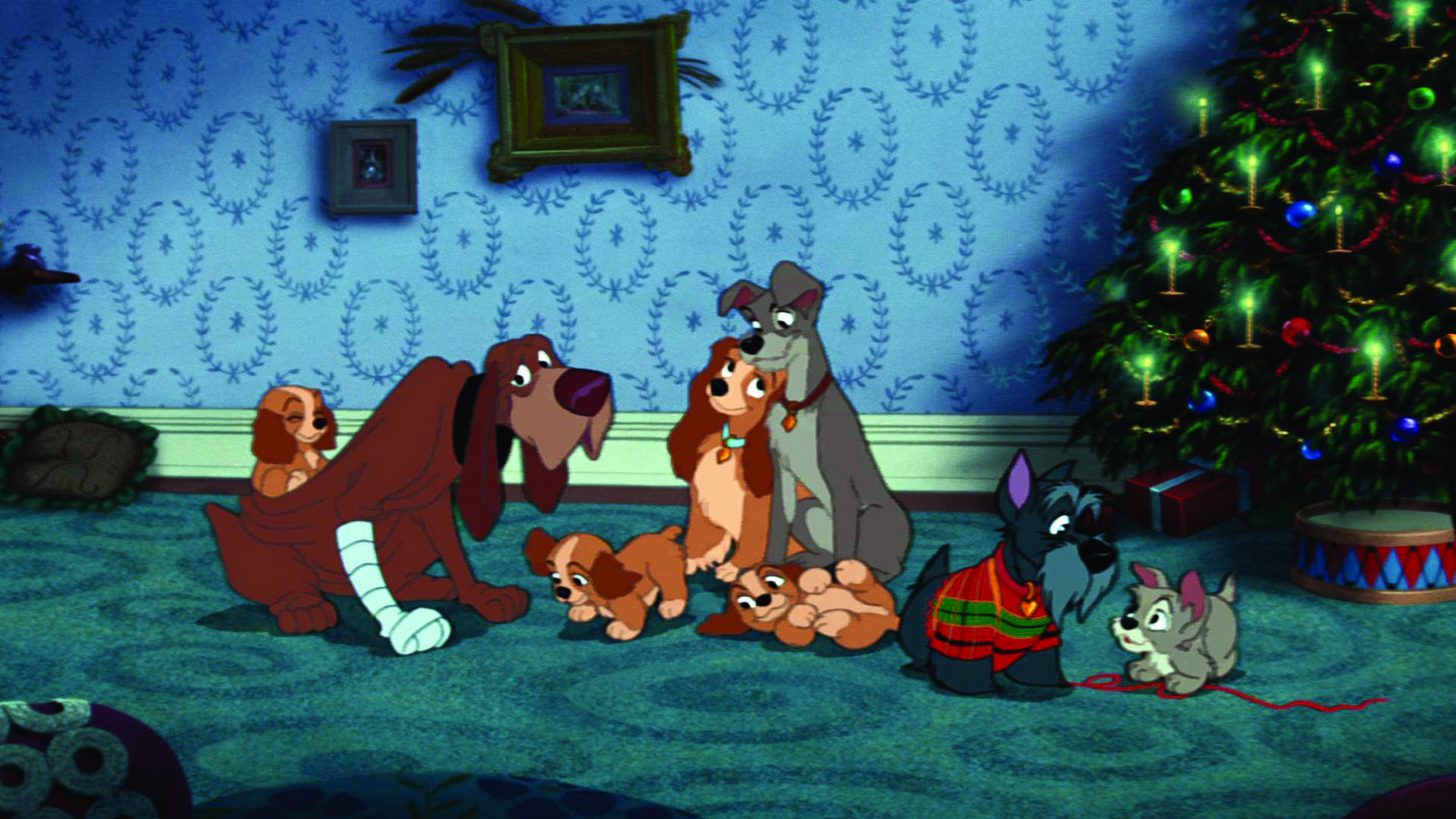 Next scene, Tramp and Lady, with the baby as they take care of their  own litter of kids (puppies).  The other dogs of the neighborhood visit, it’s Christmas, and the dog that got run down is fine.  The dogs comment about how Tramp now had a collar.

Sorry to anyone who has read this.  Surely you haven’t read anything else I’ve previously written or else you wouldn’t have read this.  Ha ha, self-hate is NOT attractive, Carl stop!  Anyhow, I’ve realized taking notes as I watch isn’t always the best thing to do unless I can use those notes to write something good, but clearly I didn’t take the time to do that, and just published as is with some annotations.  I’m certainly not doing myself any favors unless it’s actually entertaining to read.  By doing it this way I may have to re-watch a film when I write about it cause the first time I’ve missed out on the experience of watching it which is silly since the reason why I’m taking notes is because I’m afraid I’ll forget something or have nothing to say about the film.  Wow, I just really don’t trust myself.

Watching it without distraction is important because my experience will inform how I feel about the film.

Well, I guess I’ll see.  Maybe I’ll try to write this with just my notes and see if I didn’t need to watch it again.  I know for a fact I miss details.  I did with “Peter Pan,” “Adventures of Ichabod And Mr. Toad.”  I haven’t written “Peter Pan” yet at this point, but I did write “Ichabod and Mr. Toad,” and I actually watched it again.  Not sure I had to, but I’m glad I did, cause my experience of it was completely different the second time when I actually watched it, well more than I did  the first time anyhow.  I’m sure Jaysen is sick of hearing me be frustrated with myself, what a  bummer. Sorry Jaysen 😦

It’s interesting reading this, that I feel perhaps I’m beating myself up and too hard on myself, BUT what I say IS true in that I’m not actually trying to consciously create value in what I write other than possibly value in being entertaining or irreverent.  That, though, is just all by chance.  It’s lazy lazy writing.  I suppose the point for me first and foremost is to just write, regardless.  To write for me.  I started a blog to write for myself.  To express myself through free-writing, not necessarily to practice good writing, but to just write.  Maybe I should just own it.  Take it for what it is since I’m not actually trying anyhow, why then beat myself up for it.  Enjoy the process and don’t judge yourself?

There was an error retrieving images from Instagram. An attempt will be remade in a few minutes.